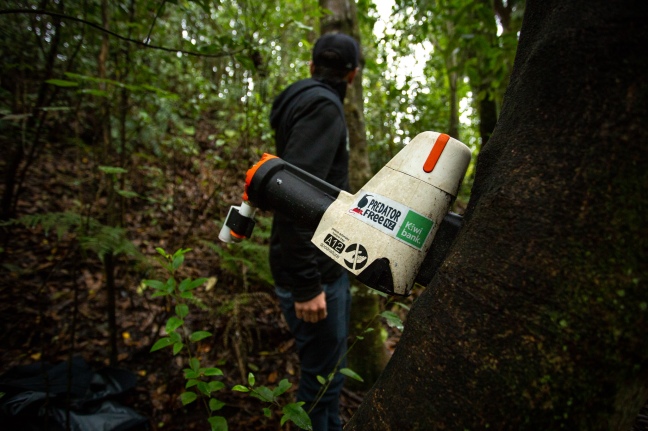 How the funding will be used, and how you can get more involved.

At the moment, our native birds have less than a 5% chance of survival to adulthood. This is largely caused by invasive predators such as rats, mice, stoats, and possums threatening the native species. The Bay of Plenty Regional Council has generously donated a grant of $1000 to The Okere Project Trust as part of an effort to increase Dabchick population numbers by reducing predation to the species. The money will be put towards predator control within 100 meters of the shoreline of Lake Rotoiti.

A 550m predator trapping line will be established in the Te Weta bay area. With our mission statement being to regenerate the environment and engage the community in sustainable practices, one of the main goals of the project is to educate and involve as many members of the community as possible. Residents can be involved by helping check, clear, and re-bait traps.

Traps that will be used for the project are DOC 200s, DOC 150s, Trapinator Possum Traps, and Te Rex rat traps. In an effort to make this project more community-oriented,  Te Rex Rat Traps will be used, which are easy enough for youth to set. The traps are currently being ordered, with trapping lines to be established in the New Year.

The recent arrival of pest Catfish in Lake Rotoiti has indirectly effected the endangered Dabchick.  Dabchicks were getting caught in the fyke nets used to catch the catfish, and becoming by-kill.  The fyke net flaw has recently been redesigned, and Dabchicks no longer get caught in the nets. The overall populations of the New Zealand Dabchick are estimated at 1,900-2,000 throughout New Zealand. The populations are also at risk due to declining water quality and habitat loss. We are thrilled to have some funding to get rid of some pests that threaten Dabchicks, and even more excited helping the community become more involved in the project.

If you want to get involved with The Okere Project please send us an email. We are always looking for volunteers to create trap lines, set up traps, and conduct monthly trap maintenance.

If you want to help stop the spread of catfish, make sure to clean, drain, and dry your boat, trailer and gear every time you leave a lake, waterway, or river. You can also go to the Te Arawa Catfish Killas Facebook page to get more involved.

You can help restore this tiny paradise

Currently live in this incredible area?

Visited since eons ago?

Simply stumbled upon Okere in your travels ?

Wanting to give a little sustainable gift for birthdays, xmas, or weddings?

What ever you are willing to donate ANY AMOUNT will be greatly appreciated. From $5 smackeroos to donating an entire trap you will be considered an absolute legend !!